The importance of distraction to get through a panic attack 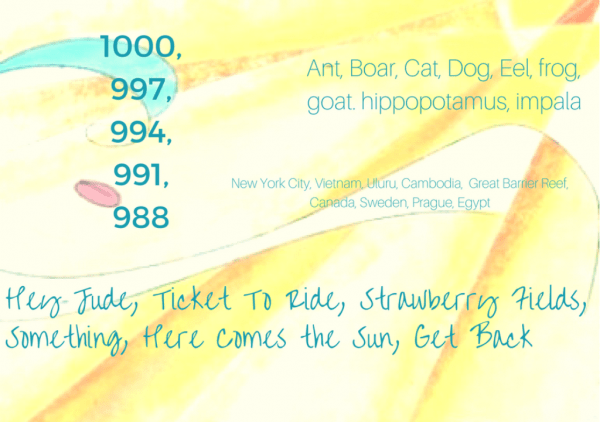 I read many, many books on anxiety recovery when I was agoraphobic. But, one major tool that was never suggested for my anxiety tool kit was distraction. That is til I met my amazing psychiatrist who was always preparing me with a distraction plan before each exposure outing.

We all know the importance of self-talk and understanding anxiety and panic attacks. I write on this myself because it’s a critical component for anxiety not crippling your life.

But, when a panic attack hits, understanding how anxiety can’t hurt you and that it won’t last “forever” is usually the last thing you can remember.

Why? Because you are terrified of the panic and what may happen that you’re most likely stuck in a brain freeze.

For those (fortunate enough to be) uninitiated to panic attacks, consider the actor on stage who’s forgotten their script – stage fright. Or being in a job interview and not being able to answer a question.

Whilst these examples may be embarrassing in the moment, when someone is having a panic attack, they think they’re about to die or do something completely humiliating that will ruin their life.

And, what makes it worse is brain freeze occurs, where the brain is unable to think clearly, with logic, and it seems impossible to get out of it. Think back to the interview where you’re unable to think of the answer, you feel stuck in time even if it’s only seconds.

The good news is distraction helps unlock your brain freeze, just like a good interviewer helps with re-phrasing the question, or the cast feeds the actor the forgotten line.

Well, consider the fight and flight response: Your body has reacted to the situation believing you are in imminent danger. To protect you from harm, your brain has automatically pumped into your body chemicals to go into either flight response (move the hell outta there) or fight (be really still to become either invisible to the danger or get you ready to fight).

Regardless of the flight or fight response, your brain needs to eliminate itself from any logic and thinking and focus all energy on your body functioning to protect itself. Voila, the brain freeze.

Why does distraction help in a panic attack? (Again, my take)

Simply put, distraction forces your brain to kick back into gear and start thinking again, logically so. You’re not in actual danger when you’re having a panic attack and the best way to get back to relative calm is to stop the laser focus on (the false) imminent danger and realise you’re actually safe.

I had a new marketing client about a 20 minute drive away in a direction I don’t drive. I can get part of the way there, to my Mum’s home, but the remainder is hard to drive without getting onto 3 lane roads – my driving nemesis. I took an Uber to the client’s office and back the first time, but I was determined to find quiet back streets for the second meeting. I spent hours and hours going through Google Maps and believed I had found the way there without getting on the main roads.

Long story short, on the way back I got completely lost and my phone’s signal wasn’t working so no Google Maps. I was in my worst nightmare, on my own, lost and about to panic. Luckily I still had an old print directory in my car and tried to find where I was, but it was so hard to concentrate. My panic was increasing and I kept turning the car around. I had visions of never getting out. I told myself I was stupid for thinking I could do the drive.

But, I also knew the only way to get out was to snap out of what was becoming a major brain freeze that was increasing my anxiety and inhibiting my logic. I pulled over for the umpteenth time, told myself I had to concentrate and spent time looking at my directory properly – no Google Map lady was getting me out of this one. I was completely shaking finding the reference points of where I was, but when I did I realised I wasn’t actually far from where I needed to be. I paid attention to where I needed to head and started driving.

Even though stopping and looking at the map was difficult and what I actually had to do to resolve my problem, the distraction from panicking (irrationally thinking I would never find my way home) to thinking logically and looking at the directory, meant I cut off the anxiety circle and my brain freeze.

What are some distraction tactics to help in a panic attack?

First, things first, I recommend you arm yourself with one or more distraction tactics before undertaking any potentially anxiety inducing activity. Write out what you’ll do on a piece of paper, if need be.

I know many anxiety experts say you shouldn’t develop so-called crutches to get you through your anxiety exposure and you need to learn to get through on your own, but, really, who cares!? I say it’s better to experience getting through activities you’d usually avoid with a positive outcome and if a crutch helps you attempt it, that’s just fine! Eventually you forget you have (the crutch) and, then, you don’t even need it.

I carried around my favourite anxiety book Living With It in my handbag for years, along with crystals and other items. So, don’t worry about it – I ain’t gonna judge!

So, here are 20 distraction ideas to try on your next anxiety exposure activity:

Of course, this list in not exhaustive, so add your own ideas and let others know what has worked for you.

I used to always use magazines and would leave crosswords in gossip magazines for car trips (as a passenger, that is!). Music has always been a big one for me too, and recently I have even grabbed my smartphone’s note section and detailed a panic attack I was going through – having to think about how I’d describe the event worked a treat.

And, what’s great about distraction is no one need know you’re doing it. Most things you can do quietly in your head or on your phone, or look like you’re being interesting (knitting or drawing, as examples).

What’s even better for your long-term anxiety recovery is you don’t need to rely on anyone else. You are learning to rely on yourself to distract your anxiety thinking. Yay you!

But, of course, give the above list or your distraction ideas to any support people just in case you’re not coping.

For any support people reading this, I will say this, and no pressure but: Don’t you freeze-up if you’re with someone panicking. When I’ve told people I’m panicking the worst response is have them star back at me blankly.

Instead, if you’re confronted by someone having a panic attack, encourage them to talk or ask them questions on just about any topic other than anxiety and how they’re feeling. They probably won’t like your questions and may snap, but you’re doing the most helpful thing – distracting them out of their brain freeze and panic attack. (Shout out to my sister who’s always been and continues to be great at this, often to my annoyance!)

Hope this article is helpful, but, as always, this is not intended to replace the work of a mental health professional and I strongly urge you to seek help. If you’re struggling right now, please contact Lifeline on 13 11 14 or beyondblue 1300 22 4636 if you live in Australia.