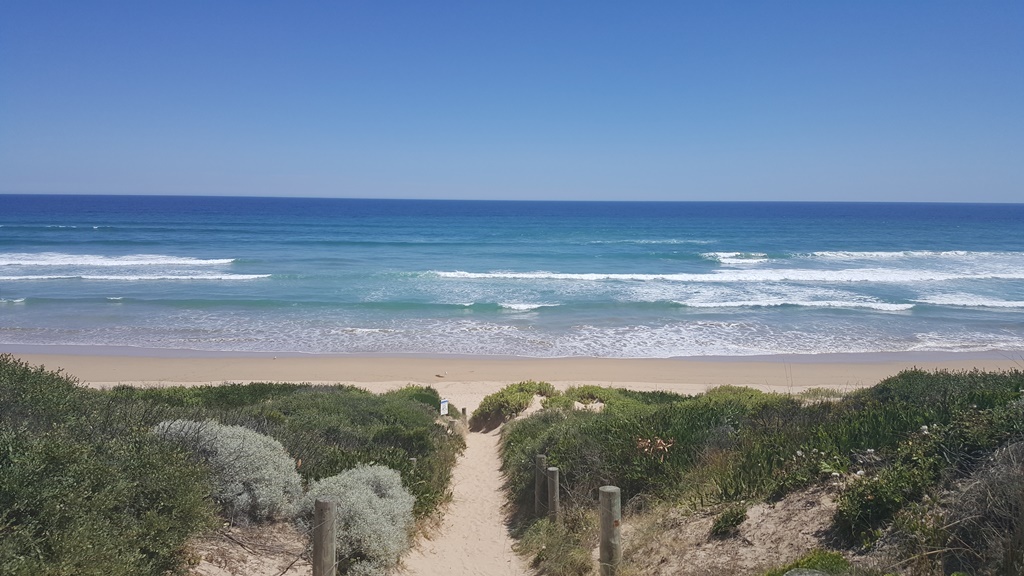 It was the Australia Day long-weekend and I was away with my Mum at our beach house escape. But with Australia Day comes people wanting to enjoy their last public holiday of Summer before the school year begins. The quiet haven is disrupted by swarms of families and people. As is my anxiety.

More often than not, Australia Day is met with a heat wave. And this year was no different. It was circa 2005 and I was only a few years into exposing my anxiety brain into holidaying down at the escape – Venus Bay, a two hour drive from my home city of Melbourne.

Until January 2003, I had not visited the family retreat (since the late 1970s) for eight years. My breakdown and undiagnosed panic attacks that lead me to agoraphobia in 1995 meant the two hour trip to Venus Bay with emergency facilities nowhere close was just too much to consider. Even when the floor boards were being done in the Melbourne family home in 1997, meaning we had to find alternate living arrangements, I refused the beach house as an option and called on my ex boyfriend and his mate for their couch – that they kindly allowed.

January 2003 I was nearly 6 years into agoraphobia recovery – or what I believed recovery would be, meaning anxiety still ruling my every decision and movement but working and living independently, kinda – I decided it was time to expose myself to holidaying out of Melbourne.

I was riddled with fear the entire car ride and stay. I had magazines to distract my mind in the car and kept conversation going with my patient Mum. I slept every night in the lounge on the coach with TV nearby and light on. My large German Shepherd insisted on daily walks and I believe (if memory serves correct) I attempted these to the beach but definitely had no joy and wouldn’t walk far from the path that lead back to the gravelly road.

So, Venus Bay wasn’t much fun as yet. But holidaying there was about self-enforced exposure knowing the only way I’d return to enjoying our sanctuary was to expose myself to the fears and learn I was safe.

It’s 2005 and my anxiety is getting better at Venus Bay, but still on high alert for panic and danger. I have progressed to nights in the spare room, but keep the lamp on and have great difficulty sleeping, if at all. I sleep a lot during the day.

This Australia Day is hot. It’s a high 30s (Celsius) and in our yet to be air conditioned, fibreglass box of a house, inside is an oven. An ocean dip is needed.

Mum drives us to the beach. (I’m yet to get behind the wheel down here for fear of – who knows…) Cars are everywhere. I instantly want to retreat to the safety and quiet of the house anticipating the people who’ve departed their transport. But Mum insists we keep going.

As luck have it, we get a park close to the path down to the sand. We get out and start our way down.

I see people everywhere. In reality, it’s not close to the numbers that would be on a mainstream beach, but, to me, in this moment of increasing anxiety, it’s packed.

I want to cry. I feel like a toddler unable to communicate their emotions but knowing something seems scary and unfamiliar – unsafe.

I want to hide.

Is my heart OK? What if I collapse on the beach?

I feel everyone’s (imagined) eyes on me.

What if I go crazy and make a fool out of myself?

The funny thing with anxiety disorder and the extremes of agoraphobia is there is no clear thinking pattern. In one moment you can be thankful people are around knowing if anything were to happen someone would see and help. In another moment, people mean risk of attention – not good, but laughter or discussion around how silly you’re being.

Why is that adult sitting in the foetal position crying, not moving. Her poor mother is trying to get her up to leave. Gosh, how embarrassing for them all.

I walk as if in slow motion to the water and waves. Mum never goes in beyond mid-calf, but if I’ve come this far, by god I’m getting some relief from the heat with a full body dunk.

I look behind to see where Mum is. Her gaze hasn’t left me.

As I turn back to the ocean I catch a glimpse of the small tattoo on my back. I’d got it around 31yo and is the Japanese character for courage. I wanted to be forever reminded what it had taken to recover from agoraphobia.

I smiled at the irony, remembered where I’ve come from and continued to walk into the ocean.

One dunk in and I felt refreshed but still on alert for danger.

When Mum shouted 10 minutes later, my heart jumped a beat and starting racing. What’s wrong?, my instant interpretation. I turned and she was pointing back to the ocean

It was a seal. About 5 metres away from where I was standing, surfing in the ocean. It popped its head up, dived under the water back to the breaking waves and caught another in.

In that moment I completely forgot myself. I forgot my anxiety. I forgot my fears. I was totally absorbed in the incredible moment of swimming in a seal’s playground.

All anxiety to get to this point of time was forgotten. No, actually, I was grateful.

There is nothing like unexpected moments in life that can’t be planned or scripted to make me grateful of my place in the world; grateful I stuck around to be a part of it.

There is nothing like being in the moment, enjoying things bigger than you to remind you the pain, tears and fears are worth the journey to never taking life’s experiences and gifts for granted.

I’ve been lucky enough to swim with a seal on two other occasions. And every time I’ve felt a magical source of energy and been reminded of my place not only in the ocean, but the world.

That’s nice perspective for someone whose brain absorbs the minutia of her and others’ lifes.

I wish the same magic for you. Fight for it – because I can tell you it’s worth it.